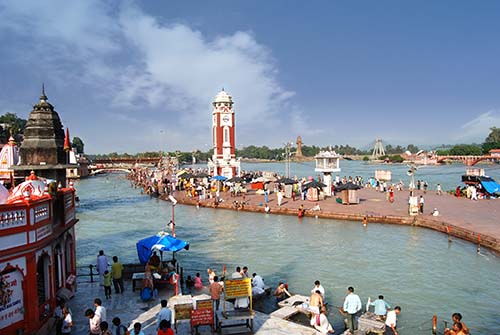 Char Dham Yatra package from Haridwar in 2019 is a pilgrimage designed for the darshan of Lord Badrinath, Lord Kedarnath, Goddess Ganga and Goddess Yamuna who reside at their heavenly abodes located in the pristine Himalayan landscapes of Uttarakhand.

Char Dham Yatra package from Haridwar
WaytoIndia has started the bookings for the moksha-granting sin-absolving Char Dham Yatra package from Haridwar in 2019. If given a chance, who wouldn’t like to embark on this life-changing pilgrimage which covers the four divine shrines resting in the folds of Garhwal Himalayas. The supreme powers sanctified this entire region as Lord Vishnu began meditating here in the form of Badrinath, the celestial rivers Ganga and Yamuna descended on the earth from here and Lord Shiva appeared here in the form of a Shiva Lingam, the endless pillar of light.
As the yatra unfolds, you witness the real miracles – from food-cooking hot springs to the water-immersed natural rock lingams and from the self-manifested idols discovered from the holy rivers to the caves where the epic mythological tales were inscribed. In this Char Dham Yatra package from Haridwar 2019, we ensure that you:

Haridwar, the gateway to the God, is the first town in the Northern Plains to welcome the vivacious Ganga as it leaves the Himalayas. Known for its riverside and hilltop temples, ropeway rides, delicious street food unbound spirituality, it also hosts the Kumbh Mela once every 12 years. After some rest, explore some of the town’s top attractions like Daksh Mahadev Temple, Mansa Devi Temple, Ganga Temple, Bharat Mata Temple etc.

What could be a better way to end the day than to attend the soothing evening aarti of Goddess Ganga at Har-ki-Pauri. Make sure that you reach the place on time to grab the best spot from where you can witness the visual treat of hundreds of lamps lit up to praise the goddess. Overnight stay at Haridwar.

On the second day of Char Dham Yatra package from Haridwar, we start the journey to the first named Yamunotri and reach the town of Barkot just miles before the destination.

On arrival, check in at the booked hotel and relax.

Barkot offers the perfect glimpse of picturesque Himalayan grandeur with massive Himalayan peaks like Bandarpunch in the background, the crystal clear River Yamuna flowing by and landscapes dotted with apple orchards.

Free from pollution and crowd, the place offers the golden opportunity to unwind and admire the nature’s overwhelming whispers. Spend the remaining day taking leisurely strolls across the town. Overnight stay at Barkot.

Wake up early morning to the chirping of birds and leave Barkot to reach Janki serves as the base for the trek to Yamunotri Temple. Janki Chatti is well-known for its hot springs that promise absolute relaxation to the mind and the body.

As you begin the trek, you would find the sky-reaching Bandarpunch on one side and the descending River Yamuna on the other. You may choose to cover the distance in a palanquin or on a horse (costs extra to the Char Dham Yatra package from Haridwar price).

Yamunotri Temple is dedicated to Goddess Yamuna, also known as Yami, the sister of the God of Death Yama and daughter of Sun God. As you reach the temple, pray to the black marble idol of Yamuna.

You may like to cook rice and potatoes in the boiling hot water of Surya Kund spring as prasada of the goddess. Later, trek back to Janki Chatti from where we drive you back to Barkot for the night stay.

Bid adieu to Barkot as we proceed towards the second called Gangotri and reach the town of Uttarkashi, located just a few miles before the .

On arrival, check in at the booked hotel and take some rest.

Other attractions of the place include the Nehru Institute of Mountaineering, Nanda Devi Institute of Adventure Sports and numerous temples, ashrams, alpine meadows, freshwater lakes and dams. You can spend the remaining day visiting these attractions and temples on your own.

On the fifth day of Char Dham Yatra package from Haridwar, join us on the road trip to Gangotri Temple which is dedicated to Goddess Ganga and located close to the river’s originating point called Gaumukh in the Gangotri Glacier.

The beautiful white granite temple on the bank of River Bhagirathi offers mesmerizing views of the snow-capped Himalayas.

You may like to take a holy dip in the sacred water of the river. Other attractions of the place include a natural rock Shiva Lingam (Jalmagan Shiva Lingam) submersed in the river and Bhagirath Shila, on which King Bhagirath performed tough penance to bring Ganga on the earth.

After you pray to the goddess, we drive you back to Uttarkashi for the night stay.

Leave Uttarkashi as we move on the way to the third called Kedarnath. However, we would stay at Guptkashi which is only miles before the holy shrine and is located on the bank of River Mandakini.

Just like Uttarkashi, Guptkashi is as sacred as the original Kashi (Varanasi) and has another Vishwanath Temple of Lord Shiva.

It is believed that Shiva disguised as a bull and hid in the ground at Guptkashi to avoid meeting the Pandavas.

On arrival, check in at the booked hotel and relax. Later, you may like to visit Vishwanath Temple and Ardhnarishwar Temple (dedicated to half man half woman avatar of Shiva). Kund is another worthwhile attraction as it boasts of two small streams of Yamuna and Ganga meeting each other. Overnight stay at Guptkashi.

An exciting day of Char Dham Yatra package from Haridwar arrives as we drive you to Phata helipad from where you board a helicopter to reach the holy shrine of Kedarnath.

As Shiva in the form of bull hid in the ground at Guptkashi, he emerged from the ground at five places, his hump emerging at Kedarnath. As you reach the temple, you would be spellbound by the heavenly natural beauty of the surroundings.

River Mandakini originating from the Chorabari Glacier flows by the temple. The snow-clad Himalayan peaks and lush green Kedar Valley seems to imitate the paradisiacal beauty.

Have darshan of the cone-shaped Shiva Lingam which is counted among the 12 Jyotirlingas and spend some time soaking in the limitless spirituality. Finally, get back to Phata in from where we drive you back to Guptkashi for night stay.

The final destination of the Char Dham Yatra package from Haridwar, Badrinath Temple, is where we drive you to after leaving Guptkashi.

On arrival, check in at the booked hotel and relax. Badrinath Temple on the bank of River Alaknanda is dedicated to Lord Vishnu’s avatar called Badrinath who is believed to be in meditation here till eternity.

In the evening, you can attend the aartis at the temple for a truly incredible experience. Pray to the black idol of the lord which is believed to have been discovered from River Alaknanda.

Get up early and reach the temple by 04:00 a.m. if you wish to attend the morning aarti (truly magical experience). Later, you can take a holy dip in the hot water spring called Tapt Kund.

Join us on excursions to the other attractions nearby, including the sacred caves of Vyas and Ganesh, Vasudhara Waterfalls, Charanpaduka (believed to be the footprints of Vishnu), Bheem Pul (believed to be built by the Pandava named Bheem) and Mana Village (the last village before the international border).

You may also like to perform at Brahma Kapal. Finally, drive from Badrinath to Rudraprayag for night stay.

As the Char Dham Yatra package from Haridwar 2019 comes to an end, we drive you to Haridwar/Delhi.

Travel Tips: Based on the experiences of the pilgrims who booked our Char Dham Yatra package from Haridwar in the previous years, here are some tips and recommendations to make your trip safe and memorable: